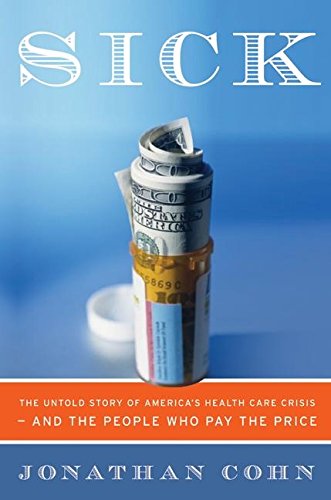 Sick: The Untold Story of America's Health Care Crisis and the People Who Pay the Price

In this addition to the growing list of exposés of the toll our patchwork, profit-based health-care system takes on Americans, Cohn makes a plea for a universal coverage with a single-payer system regulated by the government. Drawing on research and riveting anecdotes, Cohn, a senior editor at the , describes how private insurers decide who and what they will—and will not—cover. He also examines how rising health-care costs lead corporations to seek ways to deny coverage to employees, such as hiring full-time workers as temps or independent contractors without health insurance. In tale after tale, Cohn documents the sometimes catastrophic results. they couldn't. Cohn points out that managed care initially had an altruistic goal of making health-care affordable for all. But by 1997, two-thirds of HMOs were controlled by for-profit companies concerned with making money rather than preventing and easing sickness. The author convincingly argues that Medicare and universal health care in such countries as France, though not perfect, are far superior to the system most Americans face. Much of this is well-trod territory, but Cohn is eloquent, and he's good at using case studies to dramatize and explain complex issues.