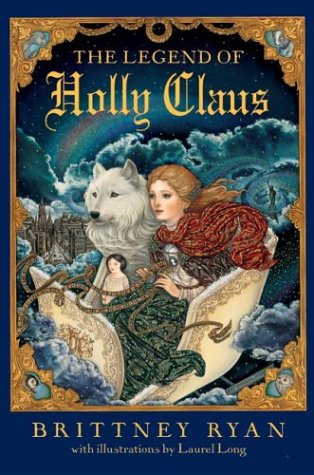 THE LEGEND OF HOLLY CLAUS

In florid prose, first-time author Ryan expands the Santa Claus mythos with this meandering novel. In 1878 New York City, 10-year-old Christopher writes a letter asking Santa what wants for Christmas—something no one has ever done before. Saint Nick realizes that he, the King of "Forever, the Land of the Immortals," wants a child of his own, and soon Holly Claus is born. Ryan borrows from Christian allegory and fairytale. The evil warlock Herrikhan, for instance, is "condemned to Odyl, the fortress that sweats beneath the earth in its bed of molten fire." The only way to break his curse is to "possess the purest and most compassionate heart ever born." That heart, of course, belongs to Holly. Herrikhan turns the baby's heart to ice, necessitating that she be kept cold or die. The book's first half follows Holly growing up in her "frozen wonderland" within the Land of the Immortals, and her relationship with Tundra, a noble wolf. In the second half, Holly and Tundra and a team of reindeer set off for New York City, shortly before Christmas; it is now 1896 and Herrikhan awaits. Holly eventually meets (and falls in love with) Christopher, now a man—but he no longer believes. Gaps in logic may trouble fantasy fans (e.g., why does Tundra's partner lose her immortality just because she fell outside Forever, even though St. Nick comes and goes without losing his?) and readers may feel gypped by the quick showdown between Holly and Herrikhan after the book-long buildup. But those searching for a lush and leisurely Yuletide read may not mind the flaws. Long's intricate pen-and-inks add to the gifty package. Ages 9-up.