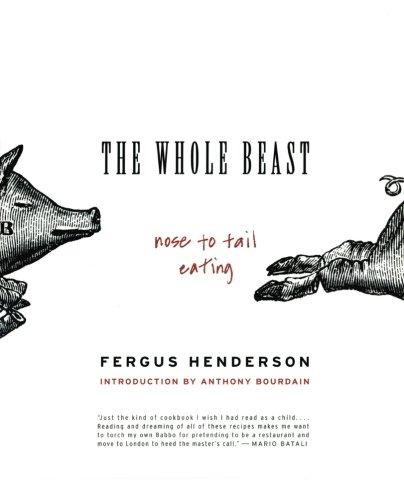 An audacious chef whose St. John restaurant in London draws legions of fans, Henderson is a staunch proponent of using virtually the entirety of any plant or animal being served up. Harking back to the days when very little went to waste, he practices what he preaches with such victuals as Rolled Pig's Spleen, Duck's Neck Terrine and Roast Woodcock, which is cooked with innards and head intact, the latter providing a bit of "delicious brains." Henderson recommends the use of a disposable Bic razor for depilating the primary ingredient in Crispy Pig Tails. And then there's Warm Pig's Head, which extreme chef Anthony Bourdain describes in his introduction as "so Goddamn amazing that it borders on religious epiphany." Here, too, are four recipes for lamb's brains, a commodity that Henderson admits is illegal in both the U.S. and England. Home chefs will encounter difficulties in obtaining other ingredients as well. Blood Cake and Fried Eggs calls for a quart of fresh pig's blood, and Soft Roes on Toast requires delicate white sacs of herring semen. Sprinkled among these challenging dishes, however, are more accessible fare: Kid and Fennel, Mussels Grilled on a Barbecue, and Radishes to Accompany Duck or Goose, wherein both the radish and its leaves are added to the bird's jus. Desserts include Treacle Tart and Carragheen Pudding made with red seaweed.