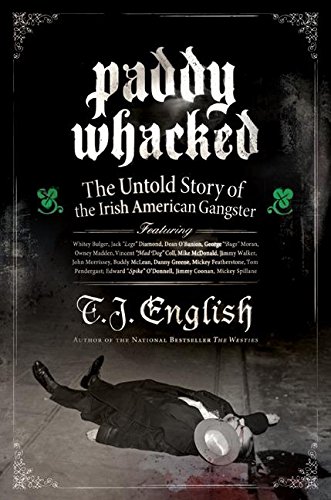 PADDY WHACKED: The Untold Story of the Irish American Gangster

The American mob has long been seen as run by Italians and their henchmen. Edgar-nominee English ( ) sets the record straight, emphasizing that Irish ingenuity first established the mob in the U.S. Close to two million Irish inundated the American Northeast in the aftermath of the Irish famine of the 1840s. "[T]he formation of a gang," writes English, "carried with it the whiff of a noble gesture," and the Irish personality—full of resentment, rebellion, suspicion and clannishness—mixed with poverty proved to be perfect for this new way of life. Prohibition—the high point for the Irish mob in America—first was viewed by the Irish as a WASP attack on their way of life, and eventually as a way to get rich. But Prohibition was also the beginning of the end of super-Irish gangsters. English covers the bootlegging escapades of Joseph P. Kennedy and—number one on the FBI Most Wanted List—Boston's Whitey Bulger. But there are also colorful details about the likes of "Mad Dog" Coll, "Two Gun" Crowley and mayors Walker of New York and Curley of Boston. This is an intense, erudite yet sometimes horrifying account of violent Celtic criminals who make the Dead End Kids look like choirboys. 16 pages of b&w photos.