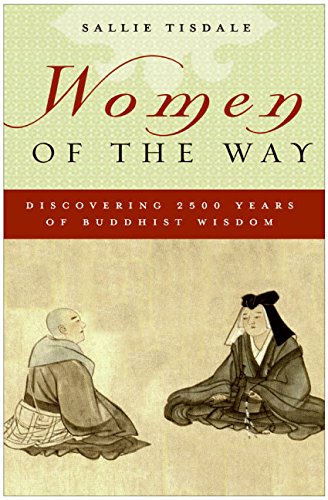 Women of the Way: Discovering 2,500 Years of Buddhist Wisdom

Known for her books and essays but less well-known as a lay Buddhist teacher and consulting editor to the magazine , Tisdale unites her spiritual and feminist concerns by breathing life into historical women of Buddhism. The book constructs a female lineage (line of teachers) for Zen Buddhism, including ancestors known through mythic tales and through Indian, Chinese and Japanese traditional writings. So much of women's history is unwritten that Tisdale "reimagines" the past in a series of stories about individual women who taught and practiced Buddhism. Some sketches are as beautifully done as brush paintings, apparently simple yet the result of skillful rendering of details selected to summon up an unknown and far removed life. Tisdale's descriptive writing is especially imaginative ("Their waters are endlessly broken by canoes and rough sailing boats, and endlessly renewed"). Occasionally, the book is confusing; the Western eye only slowly negotiates the Japanese names that can pile up in any given story of a woman and her family, teachers and temples. Although not a book for beginning students of Buddhism, this compilation of gracefully written stories helps American Buddhism put its egalitarian stamp on the evolving wisdom tradition that originated with the Indian prince Siddhartha 2,500 years ago.