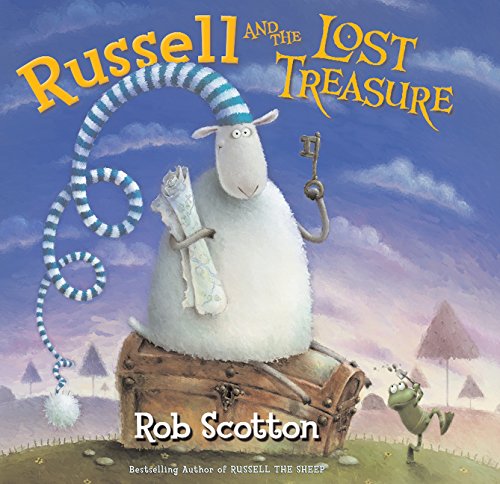 Russell and the Lost Treasure

The fleecy, fleet-footed insomniac introduced in returns in all his striped stocking-capped glory for another picture-book romp, this time on the trail of treasure. When Russell spies a tattered map that hints at treasure buried in his own Frogsbottom backyard, he springs into action. With his new invention, the Super-Duper Treasure Seeker, in hand, the hunt is on. Scotton's smattering of spot illustrations charts the initially exasperating results. "What's a sheep to do?" Russell cries in frustration. But the gadget doesn't let him down and the woolly hero recovers a locked treasure chest from deep underground. Now he wonders how to make the most of the only real bit of "treasure" in the trunk—a flash camera he deems "older than my dad!" Readers will likely delight in the funny results as much as Russell does. Scotton's sweetly comic cast of ping-pong ball–eyed sheep is still a gas to behold in these boisterous watercolors. Ever-changing perspectives make readers feel a part of the activity, and the visual antics of Russell's frog sidekick, Frankie, make for an additional source of silly amusement. The ample borders around many of the full-page illustrations make a smooth transition to photo frames, as Russell makes humorous use of his buried bounty. Ages 3-7.