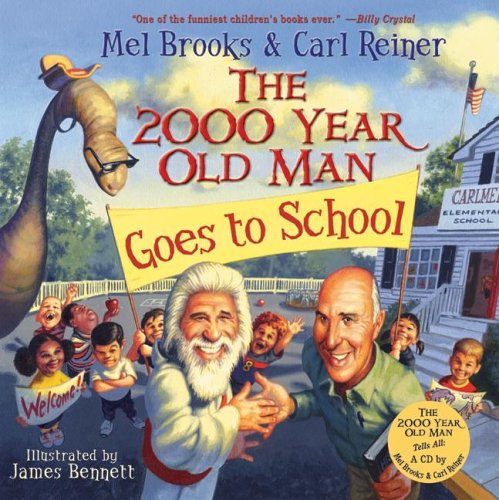 Didn't dinosaurs and cave dwellers exist separately, a bit longer than 2,000 years ago? Never mind. In this loose interpretation of history, based on the authors' skit, Reiner ( ) visits an elementary classroom with the 2000 Year Old Man, a skinny fellow in a snow-white caftan that matches his blowdried mane and beard. "Kids, this is your chance to ask the oldest man in the world anything you want," Reiner announces, prompting earnest, misinformed grade-schoolers to inquire, "How did you know how old you were…? There were no calendars!" The Man says he attended "primitive" (not primary) school, where he is pictured with a pterodactyl and woolly mammoth. His wrinkly teacher Mrs. Weinstein, sporting a furry wrap, "was so old that her father was a Neanderthal. In the winter, she wore him to class." The hero went on to Vesuvius University and "got great marks" (from the volcanic eruption). He later met Robin Hood and Shakespeare ("Don't tell me he was a good writer! He had the worst penmanship I ever saw"). Caricaturist Bennett, who illustrated Reiner's and Jerry Seinfeld's picture books, paints naturalistic settings and exaggerates characters' features. His slapstick portraits emphasize the punch lines, while the gags take evident liberties with facts. Die-hard fans will be tempted by this celebrity package, which includes an eight-minute CD of the duo's shtick, but discerning comedians must admit that the preposterous gags lose a bit of their oomph in print. Ages 4-8.