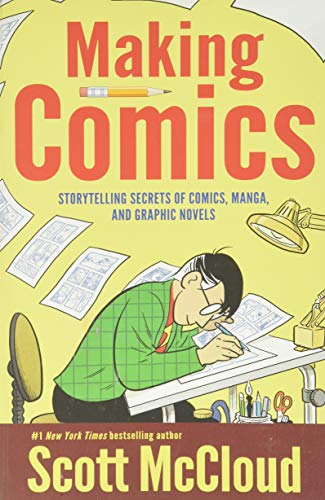 Every medium should be lucky enough to have a taxonomist as brilliant as McCloud. The follow-up to his pioneering (and its flawed sequel ) isn't really about how to draw comics: it's about how to make drawings become a story and how cartooning choices communicate meaning to readers. ("There are no rules," he says, "and here they are.") McCloud's cartoon analogue, now a little gray at the temples, walks us through a series of dazzlingly clear, witty explanations (in comics form) of character design, storytelling, words and their physical manifestation on the page, body language and other ideas cartoonists have to grapple with, with illustrative examples drawn from the history of the medium. If parts of his chapter on "Tools, Techniques and Technology" don't look like they'll age well, most of the rest of the book will be timelessly useful to aspiring cartoonists. McCloud likes to boil down complicated topics to a few neatly balanced principles; his claim that all facial expressions come from degrees and combinations of six universal basic emotions is weirdly reductive and unnerving, but it's also pretty convincing. And even the little ideas that he tosses off—like classifying cartoonists into four types—will be sparking productive arguments for years to come.