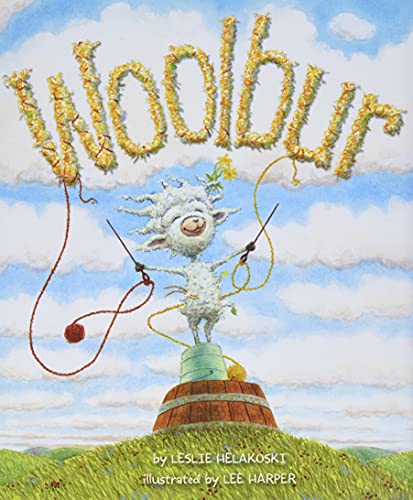 In a fresh variation on the theme of marching to the beat of a different drummer, Helakoski ( , see Notes, below) presents Woolbur, a lamb with unique ideas. A series of linguistically similar episodes takes children through the process of how a sheep’s wool is shorn, carded, spun, dyed and woven to make cloth—and at each step Woolbur demurs. “I don’t want to shear [or card or spin] my wool,” he says, and after his parents give him a reason they think he can’t refute, he repeats the line, “I know... isn’t it great?” Debut artist Harper’s quirky illustrations picture Maa and Paa pulling their wool (instead of their hair) every night as Woolbur’s Grandpaa advises them to relax. By story’s end all the other lambs copy Woolbur—carding their own wool and experimenting with color—until his dumbfounded parents fret that they won’t be able to find their distinctive son. Grandpaa says, “Don’t worry,” and the reader sees Woolbur inventing knitting. Harper meets the challenge of conceiving new ways to illustrate the patterned repetitions of the story, even if his characters are sometimes static, while Helakoski capitalizes on Woolbur’s enthusiasm despite the predictable outcomes of the similar scenes. Children will relish Woolbur’s ability to pull the wool over his parents’ objections. Ages 3-6.