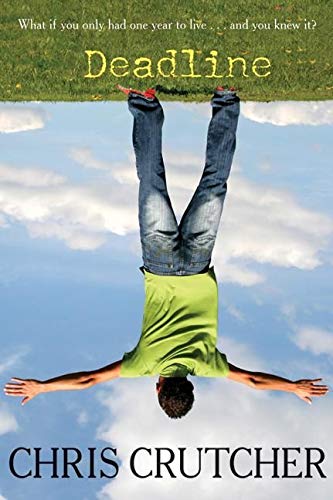 Ben Wolf, 18, goes in for a routine sports physical before his senior year and learns he has an aggressive form of leukemia and a year to live. In order to enjoy the rest of this witty and wise novel, readers will have to suspend disbelief at this point, because Ben decides to do nothing. (“I wouldn’t recommend this for anyone else, but I’m not going out bald and puking.”) He also chooses not to tell anyone and threatens legal action if his doctor breaches patient confidentiality. Readers will be treated to the thrilling last year of Ben’s life, in which the 123-pounder ditches track for football so he can play alongside his brother, Cody, the team’s star quarterback. Crutcher’s oeuvre is full of plot-heavy novels; the issues crammed into this one include alcoholism, child molestation, absent/abusive parents, bigotry, teenage motherhood and depression. But the narrative never drowns in a sea of woe. With the help of Hey-Soos, a laidback confidant who appears in Ben’s dreams, he parses the dilemmas his secret produces. Ben succeeds both on the gridiron and with the comely Dallas Suzuki. (“Submit this story to an editor and it’s returned as too much fantasy even for fantasy,” he says after she asks him to Homecoming.) Ben’s voice often sounds distinctly like the author’s, but here’s predicting readers will not care one whit. The message at the core of Crutcher’s latest—“Life’s short. Do what you love.”—is delivered inside an entertaining, thought-provoking tearjerker. Ages 14-up.