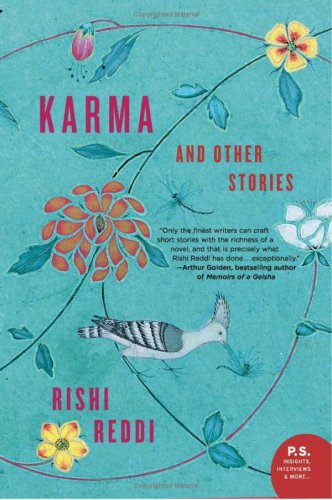 Karma and Other Stories

Set primarily in Boston and its suburbs, Reddi's debut focuses on individuals and families struggling to reconcile their Indian diaspora backgrounds with American life, while attempting to preserve their small, at times contentious ethnic communities. Often generational differences are the root of conflict—in "Bangles," a successful American doctor tries to fulfill his duty by bringing his newly widowed mother from Hyderabad to his upscale suburban home, but fails to make space in his young family's life for her religious and cultural needs. In "The Validity of Love," a rebellious but fragile young woman must examine the extent to which she's internalized traditional ideas of Indian marriage when her best friend willingly enters into an arranged engagement. In other cases, the conflict is an economic one: in the title story, unemployed Shankar Balareddy, frustrated and angered by his younger brother's callous success, searches for redemption from a youthful misdeed. While her themes are familiar, Reddi deftly employs images to crystallize them: a set of red glass bracelets smashed with a rock, a wounded bird confused by Boston's skyscrapers, even a bean-and-cheese burrito, all call to mind the isolation and occasional bewilderment shared by her sympathetic characters.