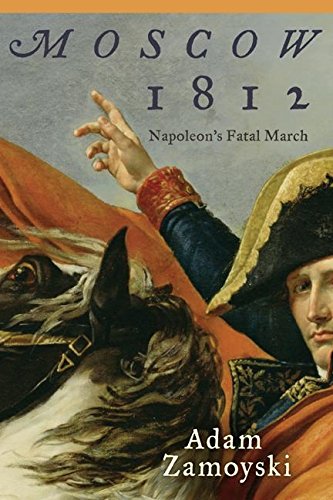 This massive study of Napoleon's famous Russian campaign may rank as the best recent study in English. Napoleon's exclusion of English trade from the Continent and Czar Alexander's territorial ambitions in Central Europe were just two elements in a collision that really did have an epic quality, to which the book's painstaking detail, balanced judgments, thoroughness of research and fluent writing do full justice. Napoleon, Alexander and their entourages are fully characterized, as are crafty Kutuzov, dashing Murat (who ruined the French cavalry) and the indomitable or inept of lesser rank. The outcome, Zamoyski shows, turned on logistics, with the French advancing inexorably farther from their bases, and strategy, in which Napoleon failed either to destroy the Russian army in a single campaign or to accept a limited victory in the first year and renew the campaign in 1813. The result was the retreat from Moscow, and the author spares none of the harrowing details of cold, storm, starvation and the vigorous efforts of the Russians to turn defeat into disaster. Napoleon and his Grand Army were still formidable foes, as at the crossing of the Berezina, but discipline was breaking down, supplies had almost vanished and the doom of Napoleon's military power was sealed. .