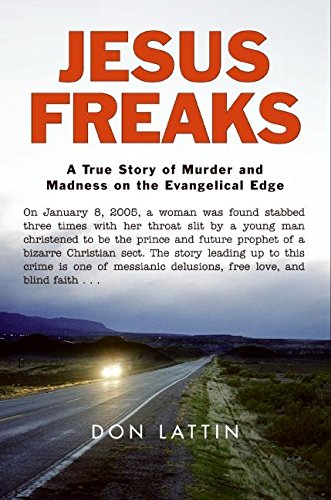 Jesus Freaks: A True Story of Murder and Madness on the Evangelical Edge

In January 2005, Ricky Rodriguez stabbed a woman to death and then fled the scene of the crime, finally shooting himself in the California desert. Rodriguez was a high-profile ex-member of the Children of God, also called the Family, a controversial hippie cult of the 1970s that had spiraled into aberrant sexual behaviors and other disconcerting practices. Rodriguez was seeking revenge for the sexual abuse that his murder victim and others had committed against him when he was a child (the cult had gone so far as to record its crimes in a bizarre book that glibly describedâ€”and provided photographic evidence ofâ€”sexual relations between adults and children). Lattin, who covered the religion beat for the , offers an arresting if uneven account of the Family. He begins by arguing that the cult is best understood in the context of American evangelicalism, and does some strong investigation into the founder's ancestry to prove this point. But he does not sustain these threads throughout the book, which becomes a typical true crime tale. Some aspects of the Family, like â€œflirty fishingâ€ (sacred prostitution), are carefully researched, while others (like a journalistic account of how the cult funded itself so well on a global scale) are underreported.