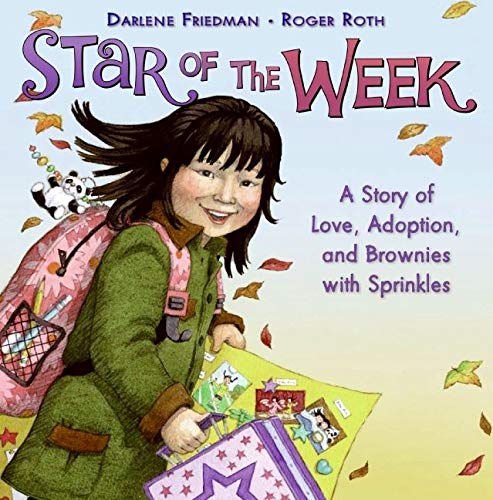 Star of the Week: A Story of Love, Adoption, and Brownies with Sprinkles

Cassidy Li is going to be Star of the Week in her kindergarten class, and that means she gets to bring a snack (the titular brownies) and chronicle her life story on a poster. But as she reviews snapshots depicting favorite activities, pets, friends and family, she also realizes that, as a baby adopted in China, “something is missing. I don't have any photos of my birthparents.” Her solution: adding a hand-drawn portrait of them to the photographic collage. Debuting author Friedman, who is also the wife of Roth ( ) and the parent of a Chinese daughter, doesn't try to smooth over the bittersweet elements of Cassidy Li's story, although she often veers into giving her heroine the voice and viewpoint of an empathic adult rather than that of a six-year-old (“Dad says our family loves my birthparents very much even though we'll never know them”). Roth's affectionate domestic vignettes bolster the story's authenticity considerably, and his vivid portrayal of the confident, thoughtful Cassidy Li speaks volumes about the unconditional love in her life. Ages 5–9.