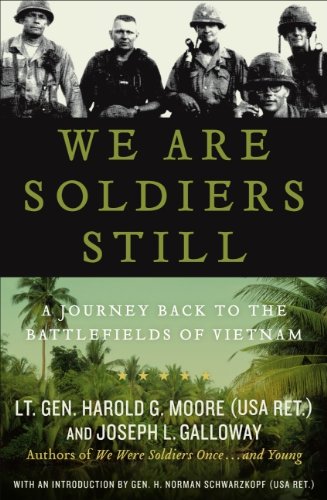 We Are Soldiers Still: A Journey Back to the Battlefields of Vietnam

It would be a monumental task for Moore and Galloway to top their classic 1992 memoir, . But they come close in this sterling sequel, which tells the backstory of two of the Vietnam War’s bloodiest battles (in which Moore participated as a lieutenant colonel), their first book and a 1993 ABC-TV documentary that brought them back to the battlefield. Moore’s strong first-person voice reviews the basics of the November 1965 battles, part of the 34-day Battle of the Ia Drang Valley. Among other things, Moore and Galloway (who covered the battle for UPI) offer portraits of two former enemy commanders, generals Nguyen Huu An and Chu Huy Man, whom the authors met—and bonded with—nearly three decades after the battle. This book proves again that Moore is an exceptionally thoughtful, compassionate and courageous leader (he was one of a handful of army officers who studied the history of the Vietnam wars before he arrived) and a strong voice for reconciliation and for honoring the men with whom he served. 16 pages of b&w photos.