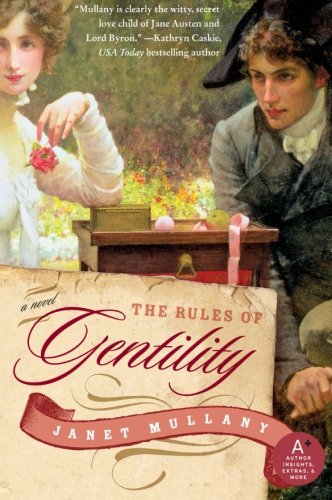 The Rules of Gentility

he saga of an Austen-era bachelorette puts the lie to Regency delicacy in this fun romantic spoof by Mullany ( ). Miss Philomena Wellesley-Clegg distracts herself from her dwindling list of suitors (those still in the running include a wimpy poet and a dandy with a wandering eye) by shopping for bonnets and gossiping with her married best friend. But when her path crosses with Inigo Linsley, her best friend's rascally brother-in-law, “Philly” warms to him, even if his kisses make her “feel very peculiar indeed.” When Inigo proposes a sham engagement to ward off her doofy suitors, she agrees—but only until the end of the social season. In turn, Inigo trusts Philly with the secret of his out-of-wedlock son and the friendship of his former lover, an actress. But some ungentlemanly conduct in a carriage sends Philly on the hunt for a more proper man. Mullany's saucy narrator and bubbly tone won't convert many classic Regency fans, but the combination should entice romance readers who'd otherwise sidestep the flurry of petticoats.