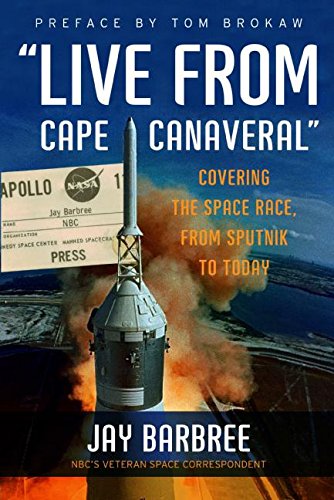 “Live from Cape Canaveral”: Covering the Space Race, from Sputnik to Today

NBC TV reporter Barbree will be a familiar figure to many readers for his frequent appearances on the show and his decadeslong coverage of the space program. As a cub radio announcer in Georgia in the late 1950s, Barbree (coauthor of ) realized the next big story was taking place on the rocket launch pad in Florida. He began a string of scoops early on when, hiding in a men's room stall, he heard that a satellite launch would carry the first broadcast from space, a recorded message from President Eisenhower. Barbree's inside access allows him to give pungent details: in 1961, “[t]he astronauts' crew quarters... were smelly, military, uncomfortable and too damn close to the chimpanzees' colony” (a chimp having preceded man into space). While recounting the exploits of the early cowboy astronauts, he gives equal time to the tragedies of and (he broke the story on the cause of the shuttle's disaster) and the near-tragedy of . Barbree writes with infectious enthusiasm about the glory days of space exploration, and his book will be an enjoyable introduction for a new generation and a fond remembrance for boomers.