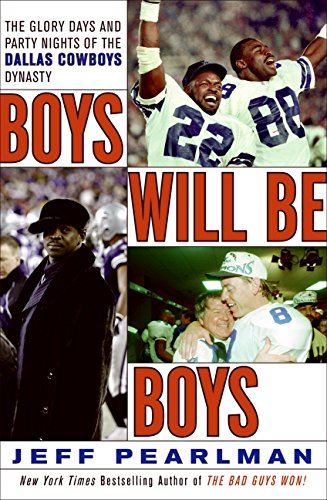 Boys Will Be Boys: The Glory Days and Party Nights of the Dallas Cowboys Dynasty

In his latest effort, Pearlman ( ) tells the story of how the Dallas Cowboys went from being a league doormat to a Super Bowl–winning machine. It's the cast of characters that makes this story a page-turner, starting with controlling owner Jerry Jones; all-business coach Jimmy Johnson, who would cut a player without blinking; and star players Troy Aikman, Michael Irvin, Emmitt Smith and Deion Sanders. Pearlman explores the many other people who bought into the philosophy that “if you were going to be a Dallas Cowboy... you needed to live the life”—and that meant, in the early '90s, plenty of infidelity, cocaine, nightly trips to gentleman's clubs and hangovers at practice. Pearlman interviewed nearly 150 members of the Cowboys organization for the book, but much of the terrific detail comes from such tangential folks as journalists, players' wives and staff at the local Cowboys restaurant. The anecdotes range from uplifting (the heartwarming story of quarterback Troy Aikman granting a wish to a dying boy) to raunchy (defensive end Chris Haley, while playing for the 49ers, often masturbated in the locker room). In the end, Pearlman has produced a narrative that is as entertaining as it is insightful.