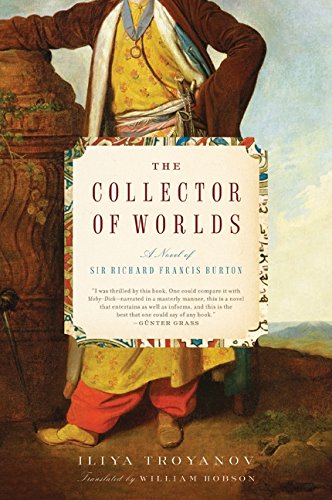 The Collector of Worlds

Troyanov recounts with gusto the three big adventures in Sir Richard Francis Burton’s oversized life: his career as officer and spy—which ended when he delivered a report on British soldiers frequenting a male brothel; his famous journey to Mecca in the guise of a doctor from India; and his exploration, with John Speke, of the great African lakes that feed the Nile. The most alluring adventure is the Indian one, which largely concerns itself with Burton’s affair with the luscious Kundalini, who ignites Burton’s interest in Eastern wisdom stories by commingling storytelling with sex. Burton’s haj to Mecca is fascinating for the details, and that Burton pulls it off. But the book’s most satisfying adventure is the African explorations; Troyanov captures the psychology of the two very different (and by the end of the trip, mutually hostile) explorers as well as he does the histories of the African peoples whose lands they pass through. Troyanov ( ) is intimately acquainted with the Indian Ocean world, and this book has the cool virtuosity of one explorer saluting another.