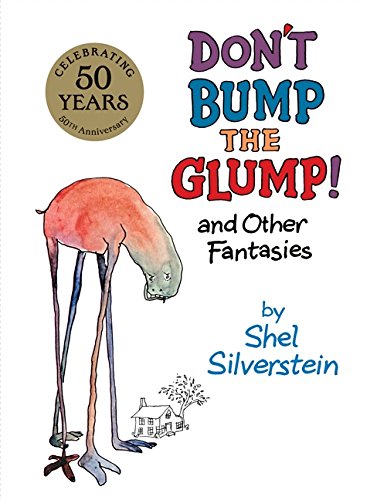 Don't Bump the Glump! And Other Fantasies

Back in 1964—the same year that his was published Silverstein's first poetry collection appeared; it was also his only children's book to contain full-color art. Reissued in a slightly larger trim size, this collection of 45 poems tours readers past imaginary creatures, beginning with a being that looks remarkably like a fedora but for the jaw subtly poking below one side of the brim and the four tiny feet beneath: “This is the Quick-Disguising Ginnit./ Didn't he have you fooled for a minute?” There's no question that the intensity of Silverstein's watercolor palette adds to the fun: the gradations in the hat, for example, distract from the “ginnit” details; more typically, they supply a punch that complements the puckish but simple shapes of Silverstein's silly beasts (“The Pointy-Peaked Pavarius,/ A creature most gregarious,/ Who's never taken serious,/ Poor thing”). “Silly” doesn't mean unsophisticated, by the way: most of the work was first published in . All ages.