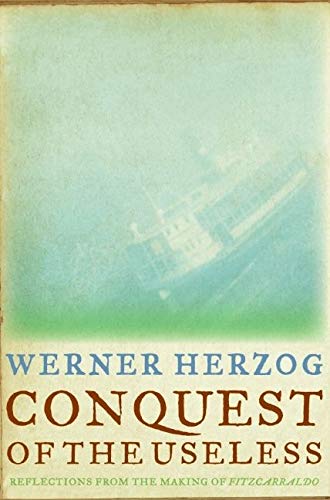 Conquest of the Useless: Reflections from the Making of Fitzcarraldo

Originally published in the noted director's native Germany in 2004, Herzog's diary, more prose poetry than journal entries, will appeal even to those unfamiliar with the extravagant 1982 film. From June 1979 to November 1981, Herzog recounted not only the particulars of shooting the difficult film about a fictional rubber baron—which included the famous sequence of a steamer ship being maneuvered over a hill from one river to another—but also the dreamlike quality of life in the Amazon. Famous faces swim in and out of focus, notably Mick Jagger, in a part that ended up on the cutting room floor, and the eccentric actor Klaus Kinski, who constantly berated the director after stepping into the title role that Jason Robards had quit. Fascinated by the wildlife that surrounded him in the isolated Peruvian jungle, Herzog details everything from the omnipresent insect life to piranhas that could bite off a man's toe. Those who haven't encountered Herzog on screen will undoubtedly be drawn in by the director's lyricism, while cinephiles will relish the opportunity to retrace the steps of one of the medium's masters.