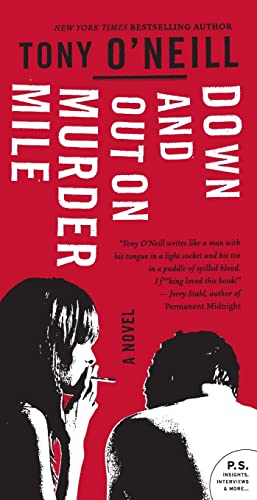 Down and Out on Murder Mile

Novelist O'Neill ( ), a recovered heroin addict and lapsed rocker, draws on his experiences for this fast-paced, compulsively readable (if occasionally self-indulgent) portrait of a young would-be rocker junkie. After most of his belongings are repossessed (or sold for drug money) and his wife Susan admits to embezzling thousands of dollars from her company to support their habit, the unnamed narrator and his wife flee Los Angeles for his former home in England. There, he tries frantically to plug back into the London drug and music scenes and struggles to get clean. Fighting violent withdrawal symptoms, living in squalor on London's infamous Clapton Road (aka “Murder Mile”) and grappling with a sadistic and controlling rehab doctor, O'Neill's antihero paints a grim, bloody picture of compulsive self-destruction. As veteran of half a dozen bands (including the Brian Jonestown Massacre), O'Neill gives himself too much space to voice his professional grievances, and there's a tendency to name-drop. Still, the novel's consistent tone of urgency and desperation creates a gritty world of its own that compels despite its flaws.