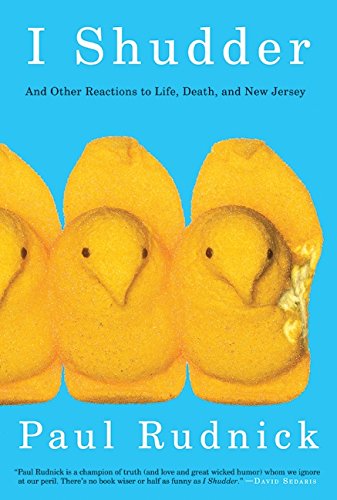 I Shudder: And Other Reactions to Life, Death, and New Jersey

Best known for his hilarious stage and screen plays, Paul Rudnick courageously takes on a David Sedaris style of memoir with this collection of essays. Rudnick offers a hilarious romp through the many components of his life: from the sweet tooth that landed him in child therapy to his debut Broadway play, —and everything in between. Rudnick's humor comes from his ability to buoyantly portray the “large-scale personalities” that fill his life, including his Jewish aunts, a neurotic agent and a flamboyant costume-designer friend. With such a cast of characters in his own life, it's no wonder Rudnick developed the comical genius within his hit screenplays: , and . Yet in these essays, Rudnick never sacrifices honesty for humor. Rather—as the title suggests—he tastefully incorporates humor into real-life issues, such as his father's death and his friend's struggles with AIDS. In addition to Rudnick's personal essay, he offers the narrative of Elyot Vionnet—Rudnick's alter ego of sorts—whose crude insights are woven throughout the book in the form of journal entries paired with absurd events. Elyot Vionnet is a compilation of Rudnick's friends and family—plus a truly New York sense of entitlement.