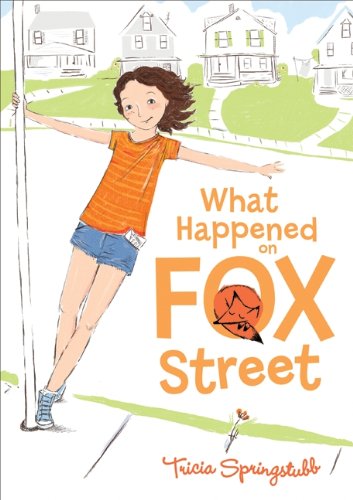 What Happened on Fox Street

Springstubb centers her story around Fox Street, a dead-end road where a cast of diverse, blue-collar characters eke out existences. To Mo Wren—an analytical, practical girl who lives with her overworked father and younger sister, Dottie, "the Wild Child"—Fox Street has just about everything, except the one thing Mo longs to find: foxes. Springstubb gently and wistfully describes a summer of tough changes for Mo: her best friend, Mercedes, announces she's not coming back (she has always spent summers on Fox Street with her grandmother), just as Mo's father threatens to relocate her own family. There is a lovely poetry to Springstubb's writing ("Just ahead lay a majestic, fallen tree, its bark thick and protective as the shingles on a house"), and her characters create the kind of interesting neighborhood most kids wish they had: Mrs. Steinbott, the "mean, spooky" neighbor, whose "life was solitary as the unplanet Pluto"; Mercedes's sensible grandmother; and the mischievous Baggott boys, who are named after zodiac signs. Mo's journey isn't particularly action packed, but in a singsong, lazy-summer-afternoon kind of way it's quite refreshing. Ages 8–12. (Aug.) T he Adventures of Nanny Piggins R.A. Spratt, illus. by Dan Santat Little, Brown, $15.99 (256p) ISBN 978-0-316-06819-2 The premise of Spratt's uninhibited debut—that a work-obsessed widower is so desperate for a nanny for his three children that he hires a former flying circus pig—is only the first of the absurdities in this collection of adventures. Sugar- obsessed Nanny Piggins, who considers school a cruel punishment, is a child's fantasy of the ideal caregiver: "She let them keep ferrets in their bedrooms, drive their father's ride-on lawnmower to the store, and eat nothing but sweets for dinner, all the time." She outwits headmasters, burglars, and circus ringmasters, and leads the children on one ridiculous escapade after another: a trip to the beach leads to being stranded at sea and rescued by Korean sailors. The sassy, tongue-in-cheek voice is rampant with asides to readers, usually variations on "which is only the truth" or "you have to understand," which can become tiresome. The plots and conflicts are thin, but readers looking for nonstop giggles and cheerful political incorrectness will devour this as quickly as Nanny Piggins can consume a chocolate cake. Final art not seen by PW. Ages 8–12. (Aug.)
close
Details