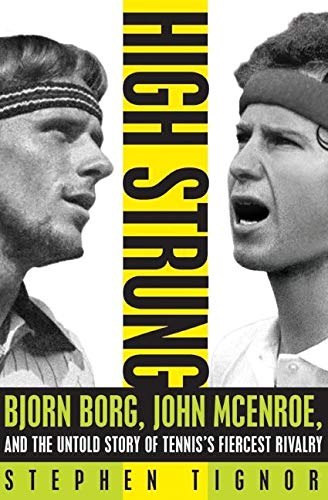 Borg and McEnroe may have enjoyed breathtaking rallies in late ‘70s and early ‘80s tennis, but Tignor, Executive Editor of Tennis magazine, largely shanks his shot at capturing the era's excitement. Tignor offers extended looks at Borg and McEnroe, but also Jimmy Connors, who had epic clashes of his own with both the "Angelic Assassin" and the "Brat." Indeed, Tignor covers many players, including Vitas Gerulaitis, Ivan Lendl, and Ilie Nastase, or "Mr. Nasty" as the Romanian was known (in profiling him Rignor finds his sweet spot). The author also lobs in doubles tennis, the women's game, Renee Richards, and a smattering of off-the-court shenanigans (Borg was superstitions; Borg slept with lots of women) but fails to argue convincingly why this epic match-up signaled the end of an era. True, when Borg retired, McEnroe began to slide. But Connors staged a remarkable comeback in his later years, and while Lendl failed to spark much interest, newcomer Andre Agassi certainly did. Fans of today's superstars—Federer, Nadal, and Djokovic–enjoy fierce rivalries almost every year. In the end, Tignor is unable to suggest that anything was truly at stake in the Borg-McEnroe rivalry beyond the money and egos involved. (May)
close
Details