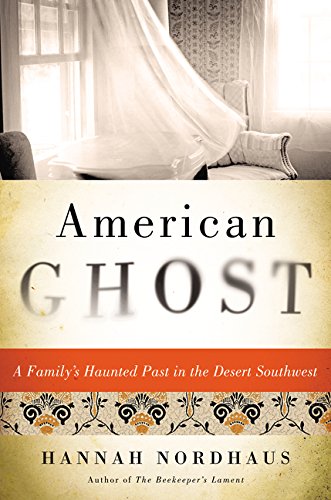 American Ghost: A Family's Haunted Past in the Desert Southwest

Journalist Nordhaus (The Beekeeper’s Lament) embarks on a “ghost hunt” for her great-great-grandmother, German immigrant Julia Schuster Staab, in this unique collision of family history, Wild West adventure, and ghost story. Since the 1970s, the grand La Posada hotel in Santa Fe has been subject to sightings of a ghost resembling Julia, who lived there with her husband, Abraham, and their seven children in the late 19th century. Nordhaus, who comes from a long line of skeptics, decides to investigate these rumors. She consults a variety of self-appointed supernatural experts—psychics, tarot-card readers, mediums, and dowsers—as well as more traditional sources such as newspaper archives, family diaries, and aging relatives. She also visits the settings of her grandmother’s life, from villages in Germany to the deserts of New Mexico where the Staabs lived alongside “Spanish settlers and Pueblo Indians... Navajos, Apaches, freed slaves, soldiers... cowboys, dry-land farmers... land-grabbers, miners, and shysters.” In the process, Nordhaus uncovers a strain of mental illness that runs through one branch of her family, delves into the lore of the 19th-century spiritualist movement, and discovers how a true-life story can become a paranormal one. Perceptive, witty, and engaging, Nordhaus observes that “it’s not so much the ghost that keeps the dead alive... as it is the story.” [em](Mar.) [/em]
close
Details