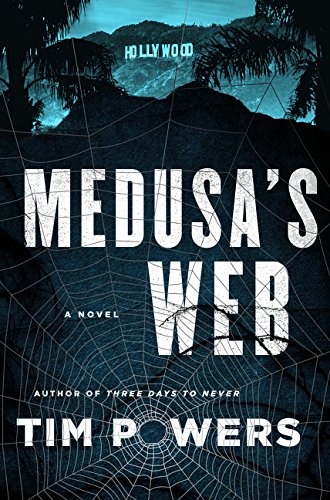 A new Tim Powers novel is always cause for excitement. His latest is a twisted journey through time travel, possession, old Hollywood, addiction, and familial violence that promises much and, mostly, delivers.

Medusa's Web is a book of mirrors and doubles, falling somewhere between a Tennessee Williams play and a Nancy Drew mystery. It centers on two sets of siblings%E2%80%94the forlorn orphans Scott and Madeline and their cousins Ariel, a recovering addict, and Claimayne, a cruel recluse. All four were raised together in a sprawling, crumbling mansion called Caveat in the Hollywood Hills, and all of them share a family secret, a set of arcane drawings known as spiders that, with a single glance, allow one to travel back and forth in time between the present day and the golden age of Hollywood. The time travel is more of an exchange program: the traveler inhabits the bodies of men and women of the 1920s and '30s, while their spirits are transported into the body of the traveler. Such journeys have become a passionate, secretive cult within the elite of Los Angeles over the decades and destroyed many lives, as the pleasures of possession prove irresistible but bad for a person's health. When Claimayne and Ariel's mother dies under extremely dramatic circumstances, the prodigals all return to the roost to uncover her mysterious past and face their own profound attraction to the spiders.

The first half of the novel is claustrophobic and self-referential, a close hothouse exploration of household dynamics that drops us into the deep end of a complex family without a life jacket. There's a realism to it%E2%80%94the family knows its own ins and outs and doesn't waste time explaining them. But the complication of the time-traveling spiders means the reader is left to flail in a baffling sea of characters in both 2015 and 1920 until the middle of the book, when the set pieces finally fall into place and the action kicks into high gear. The first half of this split narrative slowly explores obliquely expressed emotions, and the second jettisons the deeper themes of obsession, love, and addiction in favor of a breakneck race toward resolution, complete with several car chases showcasing an intimate, though occasionally comically obsessive, knowledge of Los Angeles geography.

Any time Powers lets his spiders take us back into Old Hollywood, delights abound. Silent film stars come to commanding, marvelous life, from Rudolph Valentino popping in for a surprisingly pivotal role to the captivating Alla Nazimova, who could fill a whole novel on her own. Medusa's Web struggles with making its present-day protagonists half as mesmerizing as the denizens of silent studios and those who fixate on them, and it only succeeds toward the end%E2%80%94but it ultimately does succeed. By the time the credits roll, the villain has crystallized into a dark portrait of selfishness and contorted love, the heroes have earned grace notes of surprising beauty, and you will never see Salom%C3%A9 quite the same way again.