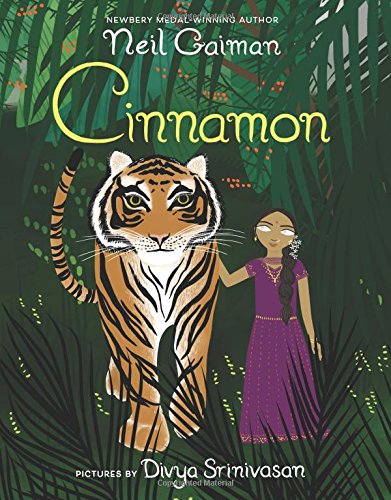 Cinnamon, the heroine of this Just So–style story, lives in a magnificent palace, wears an orange sari, and has pearls for eyes, “which gave her great beauty, but meant she was blind.” Cinnamon doesn’t talk, and her parents, the Rajah and Rani, offer gifts to those who can get her to speak. All fail until a tiger appears: “He was huge and fierce, a nightmare in black and orange, and he moved like a god through the world, which is how tigers move.” Though the family is skeptical, he begins to teach Cinnamon: “The tiger put Cinnamon’s hand into his. ‘Pain,’ said the tiger, and he extended one needle-sharp claw into Cinnamon’s hand.” The heat of Gaiman’s prose, which switches from fairy tale romance to farce and back again, stands in contrast to Srinivasan’s (Little Owl’s Night) cool spreads, which concentrate on the beauty of the Indian setting, her flat, graphic shapes ornamented with lacy filigree. This isn’t a comforting tale, but its effect is real: Gaiman puts a claw right into the reader’s hand. Ages 4–8. [em]Author’s agent: Merrilee Heifetz, Writers House. Illustrator’s agent: Steven Malk, Writers House. (May) [/em]
close
Details