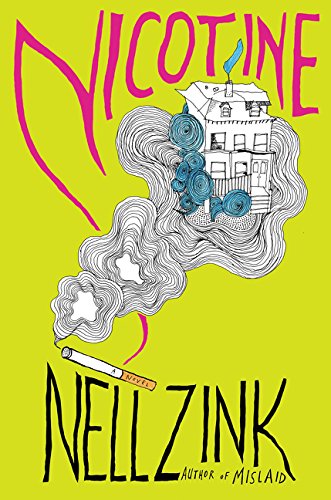 Zink’s novel of anarchy in life, love, and real estate focuses on Penny Baker, daughter of healing expert and retired shaman Norm Baker, who dies after a prolonged painful illness, leaving behind Penny and her disjointed family. Amalia, Norm’s adopted daughter whom he rescued from a Cartagena garbage dump, is also Norm’s second wife and Penny’s mom. As a not-so-grieving widow, Amalia lusts after hard-hearted Matt, Norm’s oldest son from his first marriage. After seeing Norm through his last days, Penny finds herself homeless, unemployed, and haunted by memories. Matt suggests she reclaim the family’s neglected Jersey City house, but the house, christened “Nicotine” by the anarchist activist squatters who occupy it, has only one vacant room, and it’s filled with toxic waste drums. So Penny moves into another squatter home and visits Nicotine, where she falls for self-proclaimed asexual Rob. In bold strokes, punchy metaphors, and striking imagery, Zink etches her absurdist vision of modern culture, likening Norm’s hospice to a brothel licensed as a strip club because customers must ask for what they want in code (such as sex at the brothel, or quick, painless death through drugs at the hospice). Scenes of watching a loved one die and anarchists giving more family support than family add a touching chord to this impertinent, mordant portrait of a corroded society badly in need of reclamation. (Oct.)
close
Details