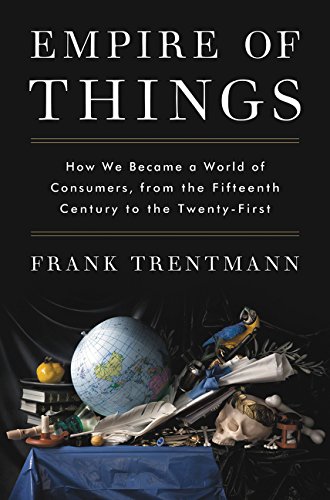 Empire of Things: How We Became a World of Consumers, from the Fifteenth Century to the Twenty-First

In this informed, detailed, and dynamic account, Trentmann (Free Trade Nation), a professor of history at Birkbeck College, University of London, investigates how consumption—the acquisition, flow, use, and disposal of things—has become a defining feature of modern lives. Organizing his work in a broadly chronological but also thematic manner, Trentmann considers a wider time frame and geographic focus than many traditional accounts of socio-economic history. He takes readers from late Ming China and Renaissance Italy to 17th- and 18th-century Britain and the Netherlands (early "hotspots of consumption"), then to Nazi Germany and Stalinist Russia, and beyond. He reveals the major forces that have framed the context of what and how humans have consumed: states and empires, war and ideology, markets and money. Along the way, Trentmann describes the inadequacies of various conventional perspectives and scholarly accounts. He takes no firm moral stance; rather, he aims to provide historical perspective on the rise of mass consumption, arguing that viewing the past through one's own moral filter limits understanding. Though general readers may have difficulty with the book's length and academic foundations, Trentmann has created a valuable contribution to the conversation around consumption—a commendable fusion of scholarship and engaging writing. Photos, maps & charts. (Mar.)
close
Details