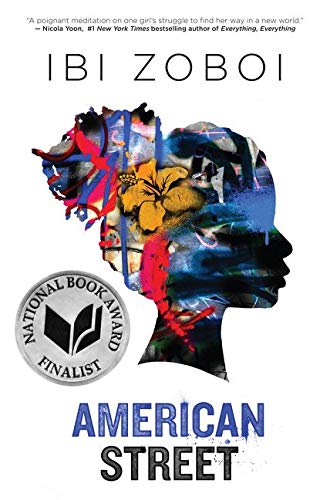 Zoboi’s powerful debut, set in current-day Detroit (but based on the author’s experience as a Haitian immigrant in 1980s Bushwick, Brooklyn), unflinchingly tackles contemporary issues of immigration, assimilation, violence, and drug dealing. Although born in America, teenage Fabiola has grown up with her mother in Port au Prince, dreaming of a better life with her aunt and cousins in Detroit. Upon arriving in New York City, Fabiola’s mother, lacking proper documents, is sent to a detention center while Fabiola must go on alone to Detroit. Shocked by the rough urban environment, her pugnacious cousins, her aunt’s lethargy, and her cousin Donna’s physically abusive, drug-dealing boyfriend, Dray, Fabiola turns to her Haitian spirits (lwas)—as well as a mysterious street man—for guidance, while embarking on a tentative romance with Dray’s friend Kasim. When she strikes a deal with a police detective to set up Dray for arrest in exchange for her mother’s release, it results in a dangerous situation with devastating results. Mixing gritty street life with the tenderness of first love, Haitian Vodou, and family bonds, the book is at once chilling, evocative, and reaffirming. Ages 14–up. Agent: Ammi-Joan Paquette, Erin Murphy Literary. (Feb.)
close
Details