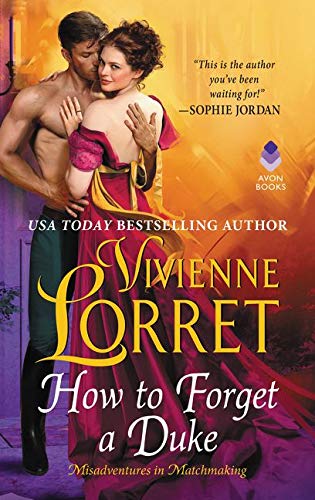 How to Forget a Duke

In this clever, original standalone Regency set in the Whitcrest area of Sussex, the methodic Crispin Montague, fifth Duke of Rydstrom, meets his match in Jacinda Bourne, an impertinent, unapologetic busybody and part owner of the Bourne Matrimonial Agency. Crispin enlists the agency’s service in finding a wealthy bride who will ask little of her husband. An incomplete application and a suspicious letter lead the naturally inquisitive Jacinda to believe Crispin is hiding something; when she’s plagued with a bout of amnesia while trying to uncover his secrets, he feels obligated to take care of her. Jacinda charms everyone from the staff to the villagers to Sybil, Crispin’s mute young sister. Crispin’s need for funds to save his crumbling estate falls victim to his growing desire for the financially strapped Jacinda, whose agency’s only rule is “never to fall in love with the client.” Lorret proves her skills by making Jacinda’s character plain to readers even though she doesn’t always understand herself. Jacinda’s constant mischief and Crispin’s reactions to her behavior add welcome humor to their slow-brewing romance, and their constant bickering is the perfect foreplay. Readers will hope for Lorret to develop a series from here. Agent: Stefani Lieberman, Janklow & Nesbit. (May)

Correction: An earlier version of this review misstated the name of the author's agent.