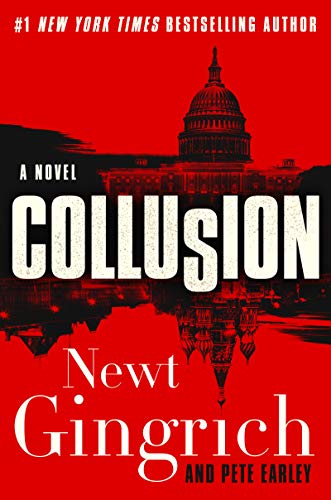 This overwrought political thriller from bestsellers Gingrich and Earley (the Major Brooke Grant series) addresses all kinds of issues dominating the headlines, from domestic terrorism and Antifa to campus protests and fake news, but it mainly focuses on the danger posed by Russia and its Putin-like president, Vyachesian Kalugin. When terrorists break into the foreign ministry building in Kiev and shoot the U.S. ambassador to Ukraine, Stanford Thorpe, the dying Thorpe instructs former Navy SEAL Brett Garrett, a member of the ambassador’s security detail, to remove a USB drive from his pocket and give it to U.S. president Randle Fitzgerald. Back in Washington, Garrett delivers the encrypted drive, which contains a message to Fitzgerald from a high-ranking Russian official who wants to defect. Meanwhile, FBI agent Valerie Mayberry goes undercover to get close to a person of interest, a wealthy 26-year-old American woman, who might have connections to the terrorist attack. Few characters rise above caricatures, and intrusive flashbacks and inside-the-Beltway information slow the plot. Fans of jingoistic action novels will best appreciate this one. [em]Agents: Kathy G. Lubbers, Lubbers Agency and David Vigliano, AGI Vigliano Literary. (Apr.) [/em]

Correction: An earlier version of this review misspelled the series name of the Major Brooke Grant books.