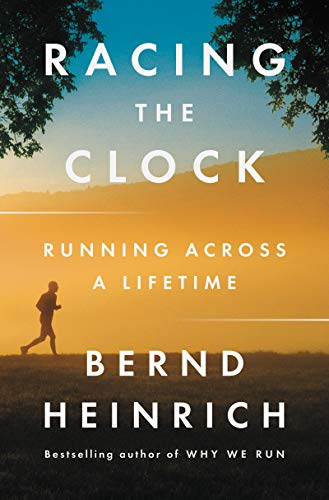 Racing the Clock: Running Across a Lifetime

Biologist Heinrich (Why We Run) delivers a powerful reflection on his decades of competitive running that’s nicely colored by an exploration of the effects of aging on the human body. Heinrich spent his childhood in a cabin in the woods of northern Germany, where his family subsisted on berries, nuts, and mice, and later moved to rural Maine, where cross-country running became his “entry into American society.” In adulthood, he balanced his passions for science and running, beating his own records on the campuses where he taught. Along the way, Heinrich explores the science behind running, covering metabolism, temperature regulation, and endurance, and finds parallels in the natural world. Studies of moths and bees, for example, show that their breathing is “synchronized with their blood flow pattern,” something Heinrich became conscious of in his long-distance running when his “unlabored” strides matched his breathing. In evocative prose, Heinrich treats readers to precise explanations of such diverse subjects as the physiology of tree frogs and the life cycle of the “suicide tree” of Central America. Heinrich’s keen observations and unique story will keep readers hooked. Agent: Sandra Dijkstra, Sandra Dijkstra Literary Agency. (July)
close
Details