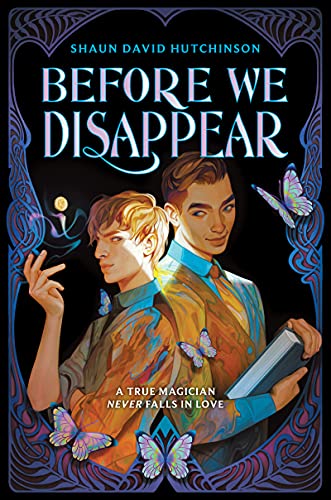 The 1908 Alaska-Pacific-Yukon Exposition draws performers, entrepreneurs, and frauds to Seattle, and white 16-year-olds Jack Nevin and Wilhelm Gessler work for people who qualify on all accounts. Jack’s boss, a magician and serial defrauder who calls herself Evangeline, took him in when he was seven; now her assistant, Jack’s an expert pickpocket with an eye for money-making opportunities. Wil, taken from his family at age four by a sadistic thief calling himself Laszlo, is exploited as part of a magic show for his ability to travel invisibly. In alternating chapters, Jack and Wil narrate the story of becoming acquaintances, friends, and more, but their affection and freedom become highly risky as Laszlo monitors Wil constantly, even caging him. To pursue their future, the duo create an elaborate scheme, aided by all their friends. The world-building can feel bulky, slowing the book’s pace, but can-do, brave Jack and Wil—burdened by guilt, fear, and the likelihood that loving him will endanger Jack—make a sweet couple. Hutchinson’s (A Complicated Love Story Set in Space) novel has an intriguing setup and historical milieu, and the final trick, which relies on magic, fraud, planning, and friendship, makes for a bravado ending. Ages 14–up. Agent: Katie Shea Boutillier, Donald Maass Literary. (Sept.)
close
Details