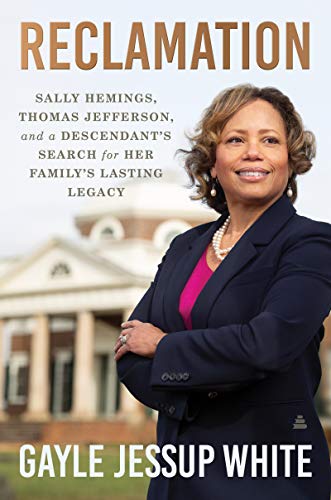 White, a former journalist who now works in public relations at Monticello, debuts with a vivid account of her search for proof that she is related to Thomas Jefferson and two of the families he enslaved, the Hemingses and the Hubbards. Mixing memoir and history, White describes growing up “Negro rich” in Washington, D.C., in the 1960s, her parents’ tumultuous marriage, and her first brush with racism during a trip to Las Vegas at age 13. She learned from her older sister—who had heard it from a great aunt—that the family was somehow related to Thomas Jefferson, and was inspired to investigate the connection by Annette Gordon-Reed’s The Hemingses of Monticello, which detailed the relationship between Jefferson and his slave Sally Hemings, who was also his wife’s half-sister, and the TV series Roots. She recreated her family’s genealogy by scouring the few historical records available, meeting with distant relatives and Jefferson scholars, and, with the help of DNA evidence, she eventually determined that she is a direct descendant of Sally Hemings’s brother, Peter, and the great-granddaughter of Moncure Robinson Taylor, Jefferson’s great-great grandson. Noting that the lives of Monticello’s enslaved families were ignored in the plantation’s exhibitions until recently, White issues a powerful call for reconsidering Jefferson’s legacy and centering the Black experience in American history. This spirited memoir charts a hopeful path for a more honest reckoning with the legacy of slavery. (Nov.)
close
Details