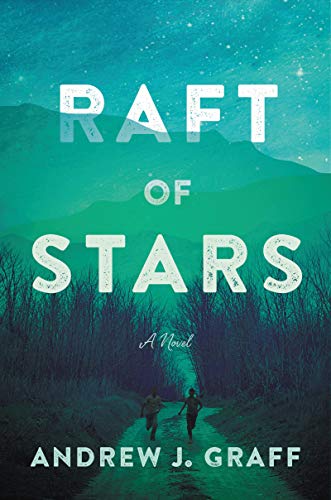 Though set in 1994, the wilderness odyssey that shapes Graff’s rewarding coming-of-age debut has a timeless, archetypal resonance. After the death of Fischer “Fish” Branson’s father, Fish spends summers with his grandfather Teddy in tiny Claypot, Wis. His best friend there is Dale “Bread” Breadwin, whose dad, Jack, is an abusive drunk. After Fish impulsively shoots Jack in an attempt to end Bread’s suffering, the two 10-year-olds mistakenly assume he is dead. They pilfer supplies, leave a note for Teddy, and hide in the dense woods that border the town while they improvise a raft to flee Claypot by river. Teddy and the town sheriff, Cal, a burned-out former cop from Texas, look for them on horseback, while Fish’s fiercely spiritual mom mounts a search by canoe with a young woman who works at a gas station and shares with Cal an unspoken attraction. By the time these six converge at a perilous waterfall, each has come to know more about themselves and each other. Though the resolution yields few surprises, Graff depicts the harsh Northwoods setting and his misfit characters’ inner lives with equal skill. The dynamic quest narrative offers plenty of rich moments. Agent: Janet Silver, Aevitas Creative. (Mar.)
close
Details