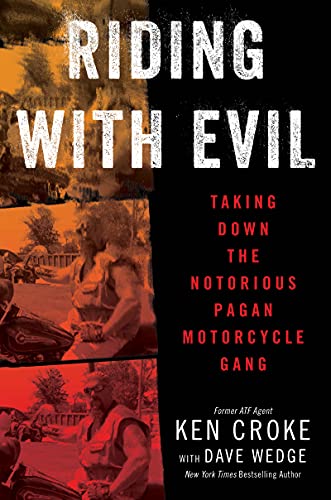 Riding with Evil: Taking Down the Notorious Pagan Motorcycle Gang

Croke, with the help of bestseller Wedge (The Last Days of John Lennon with James Patterson), debuts with a nail-biting account of how he became the first ATF agent to infiltrate the Pagans, a violent white supremacist motorcycle gang. For two years starting in 2009, Croke lived undercover in fear for his life, knowing the gang members would beat him to death if his cover was blown. In vivid detail, Croke recounts mass gatherings with as many as 5,000 Pagans, which were filled with guns, drugs, and sex workers. In addition, Croke witnessed and was involved in buying illegal guns and bombs and planning attacks against Hells Angels. He also had to deal with emotional problems back home with his wife and children, media focus on an old case of his, and the threat of a war breaking out between the Pagans and Hells Angels. Ultimately, he got out alive and was able to make a RICO case that put 20 Pagans behind bars after they were convicted of racketeering, murder conspiracy, assault, drugs and weapons possession, and witness tampering. What sets this above the pack is Croke’s attention to how hard it was to return to normal life after the case. Happily, despite the physical and mental challenges Croke faced, which included therapy for transitioning from deep undercover back to normal life, his career continued, his family remained intact, and his eldest daughter went on to become an ATF agent. This engrossing account about the realities of undercover work is must reading for true crime aficionados. Agent: Peter Steinberg, Foundry Media. (Mar.)
close
Details