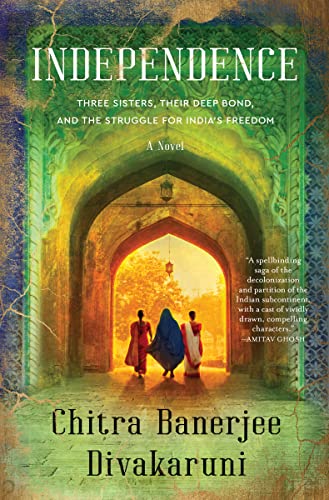 Divakaruni (The Last Queen) captures the upheaval and devastation of the partition of British India in this dazzling tale of three Hindu sisters caught up in the violent events. In 1947, Deepa, Priya, and Jamini Ganguly live with their father, Baba, and mother, Bina. Their once-peaceful Bengal village of Ranipur becomes a site of violence between Hindus and Muslims as independence looms. After Baba dies in the carnage, Bina takes to her bed, unable to work. Deepa, whose beauty is expected to bring a prestigious marriage, falls in love with Raza, a Muslim leader, and Bina banishes her as a result. Priya, who dreams of becoming a doctor, believes her fiancé, Amit, will wait for her to finish medical school, but he breaks their engagement. Amit, who still loves Priya, marries Jamini, the result of a misunderstood deathbed promise from Baba to Amit. Deepa’s situation becomes dire when Raza dies in the sectarian violence; in a hair-raising rescue into the new Pakistan, where Deepa has concealed her Hindu identity, family and friends save her from an army captain who’s trying to force her into marriage. Divakaruni seamlessly weaves the political upheaval into the characters’ lives, including the nation’s bereavement after Gandhi’s assassination and Priya’s meeting with the female resistance leader Sarojini Naidu, while also depicting the beauty, vitality, and vastness of India. This is a must. Agent: Simon Lipskar, Writers House. (Jan.)
close
Details