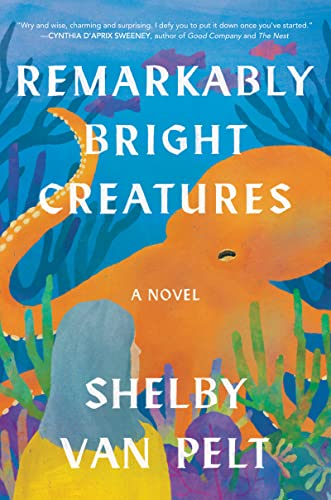 A cross-species friendship helps solve a pair of decades-old mysteries in Pelt’s whimsical if far-fetched debut. After Tova Sullivan’s husband dies, she takes a night job as janitor at an aquarium, where she enjoys talking to the sea creatures. She’s particularly fond of Marcellus, a giant octopus who shies away from most human attention. But when Tova finds Marcellus out of his tank and helps him back to safety, he becomes fond of her. Meanwhile, Cameron Cassmore comes to town looking for his long-lost father and joins Tova on the night shift, disrupting her routine. However, the two soon realize that Cameron’s mother, who disappeared after leaving him with an aunt when he was nine, and Tova’s son, who died after falling off a boat decades earlier, might have known each other. Marcellus, who lived in the sea before his capture, is the only creature who knows for sure. Pelt imbues Tova, Cameron, and Marcellus with pathos, but her abrupt cycling between their perspectives can be disorienting, and her no-frills prose is ill-suited for the anthropomorphic conceit at the story’s core. While the premise intrigues, this fantastical take on human-animal connection requires a bit too much suspended disbelief. Agent: Kristin Nelson, Nelson Literary Agency. (May)
close
Details