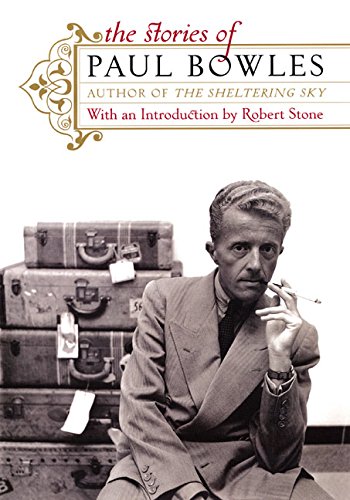 THE STORIES OF PAUL BOWLES

As elusive as his enigmatic fiction, which is epitomized by the 1949 autobiographical bestselling novel, , Bowles (1910–1999) arguably has been venerated as much for being the mythical forerunner of the Beat Generation as for his considerable genius, both musical and literary. A darling of iconoclastic literati both here and abroad, he first became known as a composer, writing music for stage and screen. Only after his marriage to Jane Auer (herself soon to become a cultishly popular writer under the name Jane Bowles) in 1938 did he turn seriously to fiction. The exotic settings of the 62 stories collected in this landmark volume reflect the wanderings of nomadic Paul and Jane as, during the '30s and '40s, they flitted from Europe to Mexico, the Caribbean and the U.S. before finally settling in Tangiers in 1949. Over the years, Bowles's fascination with Western man's intrinsic decadence, laid bare in clashes with exotic cultures, became the signature motif of his existential fiction ("The Hours After Noon" and "Too Far from Home"). His oblique language and abrupt endings ("At Paso Rojo") are curiously confounding, and his tales are invariably charged with subterranean currents. Frankly incestuous and homosexual, "Pages from Cold Point" is almost certain to stir anew speculation about Bowles's sexual orientation. Earthy, violent and comfortable with corruption, these deeply affecting stories are distinguished by their lyrical rhythms and meticulous regard for language. The assemblage of this impressive collection marks a literary event of the highest order.