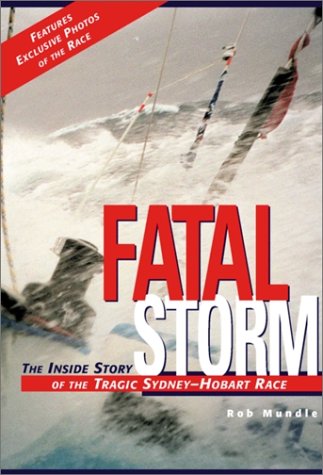 Fatal Storm: The Inside Story of the Tragic Sydney-Hobart Race

Joining the summer's books on the treacherous Vend e Globe sailing race (Derek Lundy's The Godforsaken Sea and Pete Goss's Close to Wind), Mundle's effort is the first of three forthcoming titles about the 1998 Sydney-Hobart yachting race (Pocket is publishing Martin Dugard's account in September; Little, Brown will offers Bruce Knecht's next year). In that race, seven boats were abandoned, five sank, six people died and 55 sailors were hoisted by rescuers from the impetuous seas. Seasoned journalist Mundle, himself a three-time Sydney-Hobart veteran, writes a knowledgeable account of the 115 boats and 1135 competitors that left Sydney Harbor on December 26, having precious little warning about the brutal cyclone that awaited them in the perilous Bass Strait. When the seas began towering to the height of five-story buildings, sailors were tossed about their yachts like rag dolls in a malevolent washing machine. Mundle, who covered the race for Australian television, deliberately sails around the tempest of controversies that followed the event, preferring to treat the story as a straight job of blow-by-blow reportage. While his careful plotting of a dozen boats' travails is certainly of interest, a surreal sense of dispassion pervades the text like an eerie calm found in the eye of a storm. Nonetheless, moments of poignancy stand out. One strung-out sailor hallucinates a monkey sitting atop a jagged stump of mast, while several others vow that spending hours in a wrecked cabin full of vomit, diesel fuel and salt-water convinced them to change their lives. ""I've been a pretty selfish bastard,"" says one chastened survivor. ""Just ask my wife."" 40,000 first printing. (Aug.)
close
Details