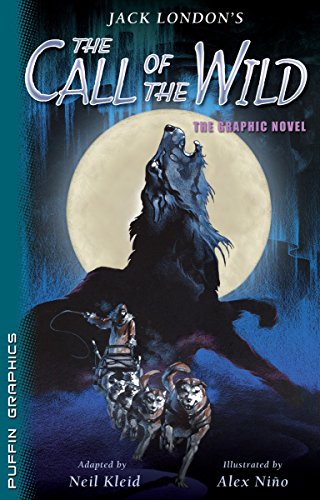 Jack London's The Call of the Wild

Years ago, Classic Comics, heavily digested versions of classic novels, functioned as illustrated Cliff's Notes for students. Kleid ( , ) and Nino ( ) have updated the old form with this adaptation of Jack London's perennial. Kleid's adaptation competently summarizes the original, introducing the reader to Buck the dog, the vile man in the red sweater and the sympathetic John Thornton, highlighting the main events from the novel and using London's most workmanlike sentences to keep the story moving along. Nino's black-and-white art has a nice kinetic, almost impressionistic quality. Unfortunately, his emphasis on movement over clarity makes it difficult to tell human beings from each other, let alone dogs, and obscures any real emotion. Kleid himself sums up the biggest problem with this adaptation in his afterword: "London was smart—he went the novel route, where it's easier to get inside a dog's head." The audience for this adaptation is blurred: older readers may just read the original, while younger readers are unlikely to understand either the art or Kleid's self-indulgent afterword, which tries to compare the adaptation to Grant Morrison and Frank Quitely's groundbreaking (but arguably unsuitable for children) .