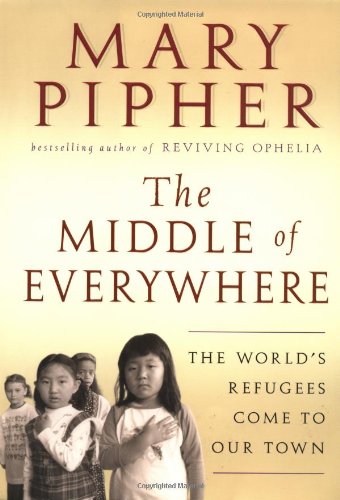 THE MIDDLE OF EVERYWHERE: The World's Refugees Come to Our Town

"I saw my father and grandfather shot in our living room," says Anton, a Bosnian teen who now lives in Nebraska. His teachers see him as a potential suicide, and he struggles to make sense of being an American high school student. Profiling Anton and other refugees from around the world—Russia, Croatia, Yemen, Hungary, Somalia, Ethiopia, Sierra Leone—bestselling author Pipher (), drawing upon anthropology, sociology and psychology, offers a deft, moving portrait of the complexity of American life. Pipher, a family therapist in Lincoln, Neb., where these immigrants all live, is interested in the effects of globalization—how it affects people's relationships, their sense of place, their identities. She writes in rich, empathetic language and with a keen, observant eye for detail and nuance. Her relationships with her subjects range widely: she is a surrogate parent to a family of four children orphaned during the Sudanese civil war; to others she is "cultural broker," for instance, helping an Iraqi family understand the difference between what they see on television and the realities of everyday American life. As in her book about aging parents, Pipher writes directly and movingly about the complications of people's lives in a constant culture clash but is mindful to place them in a clearly defined social and political setting. Noting that after September 11, "we are all refugees from what was once our America," Pipher's ambitious undertaking of combining personal stories with global politics is wonderfully realized.