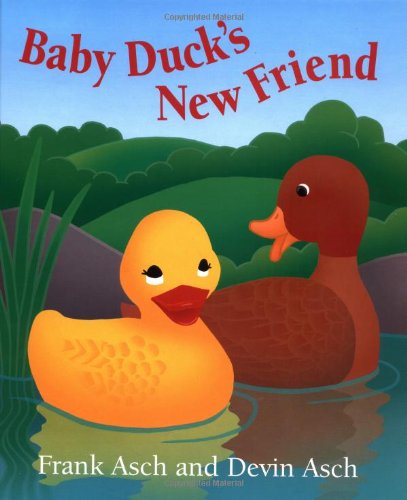 In a story with echoes of the elder Asch's , an eager-to-roam duckling befriends a rubber ducky who has fallen out of a truck and plopped into his watery path. "You don't talk much... but you sure are fun!" Baby Duck says, as he follows the impervious bobbing toy. Their adventure quickly turns dangerous. Soon Baby Duck is left deserted on a faraway beach and despairs of ever getting back home—until he discovers he can fly. A lovely glow radiates from the Asches' digitally enhanced pen-and-ink illustrations, particularly in their depictions of water and moonlight. The father-and-son team (Devin Asch makes his debut here) keeps the book's action at arm's length with their flat, mural-like renderings. This can be a plus, for instance, as the duck pair head down a waterfall, but the artwork also softens the drama of Baby Duck's reunion with his mother. Children will likely get a charge out of being in on the joke. Ages 2-5.