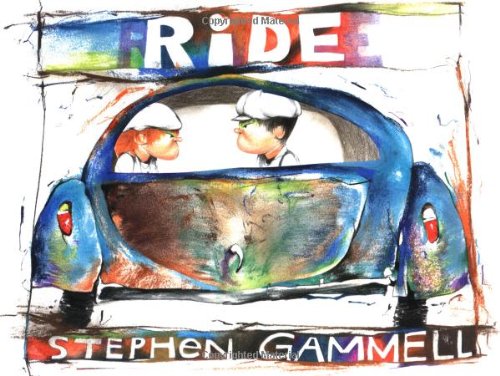 Readers follow a decidedly bumpy road as they enter Gammell's (;) picture book about siblings' backseat bickering. Out for a Sunday drive, in a time well before SUVs and seatbelt laws, a family heads for the open road—brother and sister in back, Mom and Dad in front. From the first shout of "Hey your foot is over!" the two kids begin a round of insult-hurling: " 'Well you're a poopy face!' 'Well you have booger breath!!' " The fight soon devolves into active skirmishing, then leaps into fantasy, with the children throwing bedroom furniture, then continuing their feud in outer space and, eventually, as a pair of dinosaurs. Finally, their good-natured mother offers snacks to calm them down. A closing scene depicting errant squirts of jam implies that the tussling is far from over. Gammell's distinctive pastel-pencil-watercolor compositions are a just-barely-contained cyclone of color and energy. His deployment of a rainbow palette, with occasional splatters, sometimes suggests a Spin-art machine. But his characters' faces, ranging from devilish to lightheartedly unaware, shine, as do his interpretations of the dinosaurs, a bug and a garbage truck. In balance, however, the nasty tone and unpleasant language of the text obscure much of the natural humor. Ages 3-7.