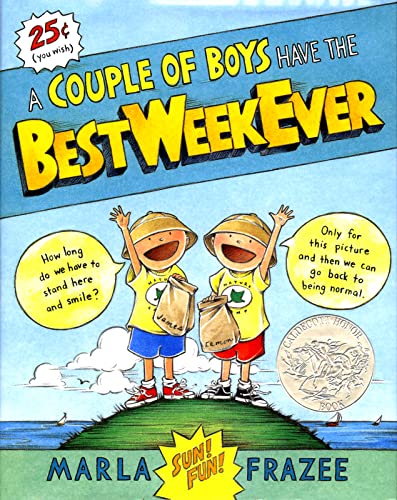 A Couple of Boys Have the Best Week Ever

Frazee ( ) salutes grandparents and slyly notes children's diversions in this breezy tale of “the best week ever.” After Eamon enrolls in nature camp, he spends nights with his grandparents, Bill and Pam, at their beach cottage. Eamon's friend James joins the sleepover, and although the text describes James as “very sad” when his mother drives away, a cartoon shows him exuberantly waving “Bye!” Humorous contradictions arise between the hand-lettered account (“Bill handed them each a pair of binoculars and a list of birds to look for. On the way home, the boys reported their findings”) and voice-bubble exchanges between the boys (Eamon, training the lenses on James: “His freckles are ” James: “Yeah, and his tongue is ”). Bill tries to interest the boys in a museum exhibit on penguins; the inseparable friends (“To save time, Bill began calling them Jamon”) show no enthusiasm yet energetically build “penguins” from mussel shells. Frazee's narrative resembles a tongue-in-cheek travel journal, with plenty of enticing pencil and gouache illustrations of the characters knocking about the shoreline. Like , Frazee's story celebrates casual extended-family affection, with a knowing wink at the friends' dismissal of their elders' best-laid plans. Ages 6-9.