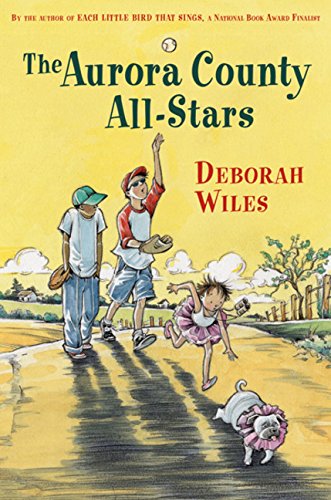 Batter up! National Book Award finalist Wiles ( ) delivers the third book set in her fictional Aurora County—a more boy-friendly read than its predecessors, with plenty of talk about baseball and what constitutes a stalwart team. Twelve-year-old House Jackson, the Aurora County All-Stars captain and star pitcher, has slogged through the preceding year with an out-of-commission elbow. Instead of playing baseball, he’s spent most of his time indoors, reading the classics to an old recluse, Mr. Norwood Rhinehart Beauregard Boyd. But when Mr. Boyd dies, House is reminded of his itch to play. Unfortunately, the All-Stars’ only game of the year is scheduled for the same day as Aurora County’s 200th anniversary pageant, an event directed by pesky 14-year-old Frances Shotz, the girl who broke House’s elbow. After a series of minor mishaps, betrayals and bouts of miscommunication, House and Frances work out a hilarious compromise that all readers can root for. In the spirit of Ernest Thayer’s poem, “Casey at the Bat,” the energy during the game mounts, and sports fans will be on the edge of their seats to see which team triumphs. Quotations from Walt Whitman’s poetry, baseball players and Aurora County news dispatches pepper the story and add color; fans will enjoy Ruby’s fortuitous cameo. A home run for Wiles. Ages 10-up.