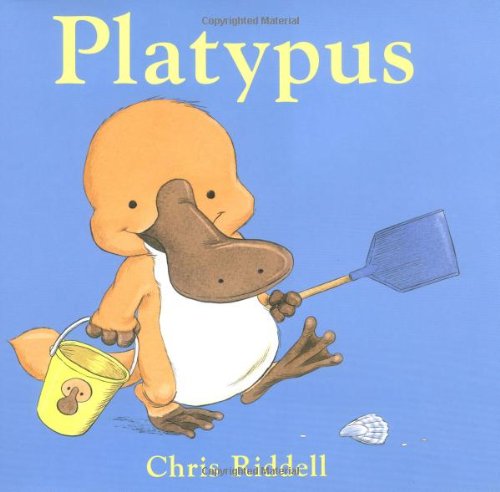 Riddell's (illus. of ) spunky hero has a bill the size of a clown's shoe and a comic case of the collecting bug. In one of the book's many crisp and austerely composed watercolors, Platypus proudly displays the contents of his big green collecting box: a blue sneaker, an acorn, marbles, a bottle cap, etc.—a collection to be envied in any child's estimation. Yet something is missing. "He didn't know quite what he was looking for," writes Riddell as he sends Platypus down to the beach on a quest, "but he was sure he'd know it when he saw it." A beautiful shell seems to be just the ticket, except that it won't stay put: two tiny eyes and a single claw poke out of the green box as Platypus sleeps, and the next morning the shell is gone. The same thing happens when Platypus reclaims the shell. The reason, Platypus discovers, is that the shell already belongs to someone—a hermit crab. Youngsters in the throes of a hoarding phase will sympathize with the hero (who sleeps with a tiny stuffed toy platypus), while Riddell's well-paced plotting makes the mystery and the resolution equally enticing. Happily, a second Platypus title is scheduled for next season. Ages 2-5.