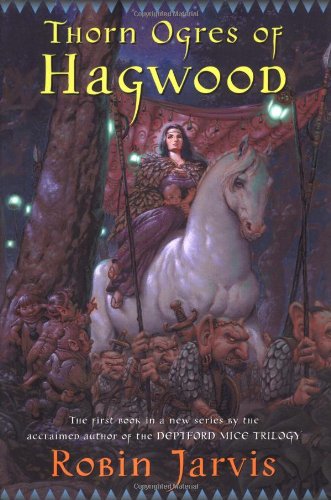 Learning the ancient secret that keeps the tiny race of Hagwood Forest's werling folk safe is only one highlight of this fantasy, the smashing launch of the Hagwood Trilogy. Jarvis, author of the Deptford Mice Trilogy, here abandons mice (well, sort of) to concentrate on wee werlings, who can wergle (or transform) themselves into any creature of similar size. Readers will easily identify with seven-year-old Gamaliel Tumpin as he begins the first day of werling school with the same butterflies human children feel, accompanied by his crabby older sister, Kernella (whose "two prominent peg-shaped teeth... stick out and make her resemble a vexed rabbit"). She is crazy about popular Finnen Lufkin, who can wergle himself into almost any creature faster than even their jealous tutor, Terser Gibble, can. But trouble brews in Hagwood, and soon wergling won't be enough to protect them from the wasp/spider, Frighty Aggie ("Would that she were only a nursery bogey.... But she is not. The horror that is Frighty Aggie is as real as you or I. Doubt that at your peril," Gibble tells a student), nor from the wrath of wicked Rhiannon, faerie Queen of Hollow Hill. Rhiannon seeks the missing treasure box stolen by the Smith, last of the dwarfs who once served her and her monstrous thorn ogres. Jarvis turns up the volume on his trademark suspense blended with whimsy, and readers are drawn deeper into the magical conflict through Gamaliel and Finnen's involvement. Fun for Hobbit-addicts and Potter-philes of all ages. Next up in this series: . Ages 10-up.